The US tour dates for Lady Midnight, the first book in The Dark Artifices, are here. Cassie Clare will be on tour to promote the book, alongside her regular tour partners, Holly Black and Sarah Rees Brennan.

The tour starts in Los Angeles on the 8th of March and culminates in Austin on the 16th.

Check out the full schedule below:

Hope to see you at the Lady Midnight US tour! Starting in LA since LM is is set there, and heading east..

Cassandra Clare talks City of Heavenly Fire, talks of early death and weddings in the book 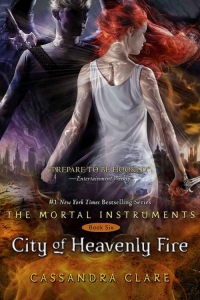 Cassandra Clare talked to Entertainment Weekly about the final installment in The Mortal Instruments series, City of Heavenly Fire, in which she gives us a lot of non-spoilery insight into the book. In addition, she also teases a secret TV project, and what we can look forward to from her (besides the other books set in the Shadowhunters world, of course).

Check out excerpts below:

ENTERTAINMENT WEEKLY: First of all, what do you think about the cover?
CASSANDRA CLARE: I really love this cover. Cliff [Nielsen] has done all of my covers since the beginning, and I think he has created a unique look that is specific to the series. We talked back in the beginning about deciding who was going to go on what cover, and that this cover was going to end up with Clary and her brother. This is the big face-off. This is the book where she goes up against her brother Sebastian, and he is the big villain. It’s kind of like a Batman/Joker cover. … And in a way, there’s a play of light and dark going on on the cover, and that sets up a big battle between good and evil with Clary standing for good and Sebastian standing for evil. There’s also little clues for the readers who have been reading the series a long time in the weapons that they’re holding, in the necklace that Clary is wearing, and especially in the landscape that they’re standing on. It gives a hint about what’s coming and what’s going to happen in the book.

What can you tease about the book?
I can definitely say that the characters go to a location that we’ve heard about, but we’ve never seen in any of the books. There is a death of a major character really early on in the book that I think will surprise people. And there are two weddings.

What else are you working on?
Well, City of Heavenly Fire comes out in May. Then in September, I have a book coming out called The Iron Trial which is co-written with Holly Black. It’s written for a slightly younger audience. And after that, we’ll get into The Dark Artifices, which is another series set in the same world of The Mortal Instruments that takes place five years after. It picks up with the story of a group of characters who are actually introduced in City of Heavenly Fire. We get to know them, and then we’re going to follow their adventures. That should be out next year.

The interview is followed up by an excerpt from the book, so if you would like to read it, click here.

Okay, so I am a little nervous about the early death. Really, Cassie, early death? Why? I am kind of worried for Maia, because it doesn’t seem right for any of the other characters – Simon, included – to go off early because Clary needs her friends. Although, for her emotional growth, it could fit, but I’m sure she’s had a lot of that already.

At least there’s two weddings thrown in so yay!