The Teen Choice Awards 2018 were held on Sunday night, August 12.

Katherine McNamara expressed her thanks to the fandom on Twitter earlier:

Thank you, Angels! Tonight was magical and largely because of you! I’m still processing! By the angel, we have the most amazing fandom! 💋✨🙌 #TeenChoiceAwards @TeenChoiceFOX pic.twitter.com/xrJCxeh8hO

Congratulations to everyone involved!

Luke Baines cast as Jonathan Morgenstern in ‘Shadowhunters 3B’

The rumors had been floating online about this one for a while. Freeform has officially confirmed that English/Australian actor Luke Baines is now playing the role of Jonathan Morgenstern in Shadowhunters 3b.

Jonathan is finally shedding the identity of Sebastian Verlac (played by Will Tudor) and we get to see him in the remaining episodes of the season.

Here’s Luke introducing himself to the SH fam:

Meet @LukeBaines who will be playing Jonathan reborn on #Shadowhunters. We're so excited to have him as part of the Shadowhunters fam! ✨ pic.twitter.com/dFR2h7wDhq

Katherine McNamara and Dominic Sherwood too reacted to the news on their Twitter accounts.

I’m devilishly excited to, at long last, be able to say… Welcome, brother dearest… @LukeBaines ! Angels, you’re in for a hell of a ride… @shadowhunterstv pic.twitter.com/vgfRxFEu5R

FINALLY!!! I’m looking forward for everyone to see @LukeBaines in action. He blew us away!! #shadowhunters https://t.co/2DnaMneAuH

Shadowhunters will wrap up in spring of 2019 with 12 more episodes, although a strong #SaveShadowhunters campaign is currently underway on social media and in the offline world.

Shadowhunters to wrap up in spring 2019

Sad news, guys. Shadowhunters is canceled after three seasons. The show will wrap up with twelve more episodes and a two-hour series finale in 2019. 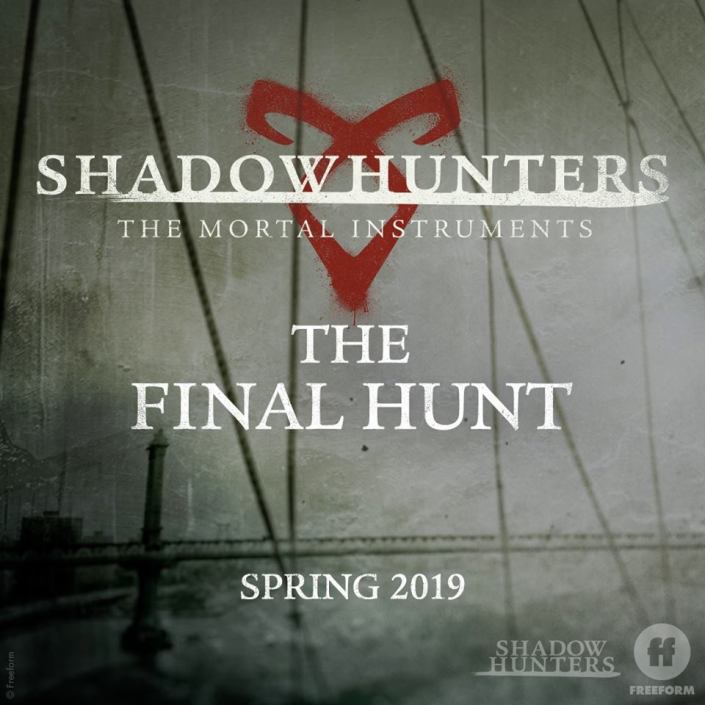 From The Hollywood Reporter:

“We are very proud of Shadowhunters, a series that broke new ground in the genre world and became a fan favorite,” the network said Monday in a statement. “However, along with our partners at Constantin, we reached the very difficult decision not to renew the show for a fourth season. But as big supporters and fans ourselves, Freeform insisted on and championed the filming of a special two-part finale that would give devoted fans a proper ending. The 12 episodes will air in spring 2019. We want to thank our talented creators, producers, cast and crew along with our colleagues at Constantin for their hard work and dedication and to Cassie Clare for her incredible book series. We look forward to the final chapter of this breakthrough drama.”

Here’s what the cast and crew said about the cancellation:

Shadowfamily- this has come as a complete and utter shock & I am deeply saddened. To make this show for you has been an uncommon privilege. We built this film family together and we couldn’t be more proud of all the talent in front of & behind the camera who brought SH to life.

Deeply moved by all the love and support from this incredible fandom. Every storyteller dreams of making an impact on an audience and you guys have made our dreams come true #blessed #shadowhunters

We still have 12 episodes left to finish what we started on @freeform & @netflix. You all have been so supportive and it’s been inspiring to read your tweets, comments and letters pouring your hearts out on how much the show means to you. I am honored to be part that.

To all the Shadowhunter fans… it was a great ride. I was so lucky to have met/worked with such an amazing cast and crew who I will truly miss. Thank you @FreeformTV and thank you @ShadowhuntersTV I love you all, and thank you for letting me be your Raphael Santiago❤️

support. I can't thank you enough for the ride. #akucinta…

I’ve been a fan of these books for a long while, and seeing it come to life in both movie and TV format has been incredibly amazing for me as a fan. And I wanted to say that in today’s ever-changing media world, nothing is ever done. We got a lease of life after the movie. So who is to say the show won’t get picked up again by another network? Or a new adaptation if it comes down to it?

And reiterating, there’s still more Shadowhunters to come: the second half of season three will air in 2019.